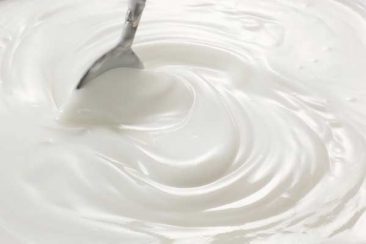 IÖGO 0% HAS CHANGED AND HERE ARE 5 GOOD REASONS TO TRY IT!

The new recipe for our iögo 0% yogurts will make you forget everything you’ve ever known about fat-free yogurts. From the taste and texture to the composition and nutritional value, we updated everything!

IÖGO 0% HAS CHANGED AND HERE ARE 5 GOOD REASONS TO TRY IT!

Fat-free yogurts have come a long way since their introduction. Originally, they were meant to be “slimming” yogurts that were eaten to maintain one’s figure. This no longer applies … and that’s a good thing!

The new recipe for our iögo 0% yogurts will make you forget everything you’ve ever known about fat-free yogurts. From the taste and texture to the composition and nutritional value, we updated everything! This is what you can expect now:

Artificial sweeteners have been a hot topic in recent years. Their big advantage is that they add a sweet taste to food without adding calories. But there’s also a drawback: these synthetic substances also add a slightly bitter or other aftertaste that disturbs the taste buds. From a health perspective, studies contradict one another about their potential effects. Nevertheless, professionals agree that more natural ingredients are always a better choice.

For all of these good reasons, we’ve completely eliminated artificial sweeteners from our fat-free yogurts. Instead, we’ve added a touch of cane sugar and included pieces of real fruit. Finally, like all of our iögo yogurts, our 0% line contains no artificial colours or flavours.

Our new recipe contains only 8 g of sugar per 100 g serving – which includes the sugar naturally found in milk (lactose) and fruit. In other words, each small container of iögo 0% yogurt contains less than the equivalent of one teaspoon of added sugar. That’s 25% less than in our regular yogurts* and a fraction of the daily sugar intake recommended by Health Canada for an adult.**

With the exception of our vanilla yogurt, all varieties in the line still contain beautiful pieces of fruit: strawberries, raspberries, cherries, blueberries and peaches. It’s very different from a “fruit-flavoured” yogurt, and you’ll notice that in every bite!

If you’re looking for a low-calorie yogurt, you should know that each 100 g container of our 0% yogurts contains only 60 calories. Put another way, this represents about 3% of the energy that an adult consumes on average per day. That’s even less than a fresh apple, which contains between 70 and 100 calories depending on the variety and size. Of course, we’re not saying that you should replace an apple with a yogurt, because both are nutritious foods that contribute to good health. What’s certain, however, is that you can enjoy iögo 0% yogurts at any time of the day!

For a long time, fat-free yogurts have been lacking in taste and texture. That’s now a thing of the past! Our new recipe delivers a completely authentic taste thanks to the substitution of artificial sweeteners with a touch of cane sugar, in addition to the presence of real fruit pieces. And the fact that we only use fresh, 100% Canadian milk is another guarantee of quality. As for the texture, it’s smooth and truly enjoyable – and always gelatin-free.

In short, we’re proud to say that that the new recipe for our iögo 0% line provides absolutely everything you’d expect from a good yogurt: simple ingredients, a smooth texture and an authentic taste. All the good things you’ve been looking for, without the fat!

So good, it makes you feel good.

**Health Canada recommends a limit of 125 g of added sugar, based on a diet of 2000 calories per day. 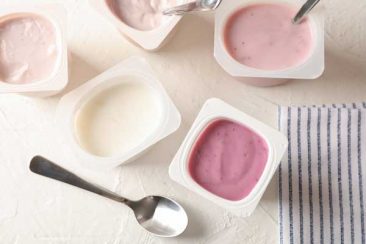 WHY IS IT BETTER TO AVOID ARTIFICIAL SWEETENERS?

To understand the popularity of sweeteners and why they’re controversial, here’s a brief overview.

WHY IS IT BETTER TO AVOID ARTIFICIAL SWEETENERS?

Artificial sweeteners have been making headlines and arousing curiosity since their discovery. And for good reason: these substances have the distinctive characteristic of being very sweet without containing any calories. Now, that’s surprising!

As with many new products, it was by accident that the first artificial sweetener – saccharine – was discovered at the end of the 19th century. But the substance had a bitter, metallic aftertaste, so much so that it was soon forgotten. It wasn’t until the 1960s and 70s that sweeteners began to be studied more seriously. In Canada, the first artificial sweetener to be approved as a food additive was aspartame, in 1981.

Since then, several others have been developed and marketed: sucralose, sugar alcohols (e.g., maltitol, sorbitol, xylitol, etc.) and acesulfame potassium. They are found in a wide variety of products, including so-called “sugar-free” products. However, as with many food additives, there has never been unanimous agreement on their use.

To understand the popularity of sweeteners and why they’re controversial, here’s a brief overview:

By definition, “to sweeten” means “to make something more pleasant by adding sugar or a chemical to provide a sweet taste.” Whether you add honey, maple syrup or aspartame to a recipe, you’re sweetening it. That said, it’s important to distinguish between foods that are naturally sweet and substances that are synthesized in a laboratory, since they have completely different compositions.

Artificial sweeteners, also called “sugar substitutes,” are molecules that provide no nutrients. They are added to foods only to give them a sweet taste.

Why would you want to sweeten without sugar?

It’s well known that sweetness is a very pleasant basic flavour that we all like. However, Canadians have been eating too much sugar for a long time – a habit that has several health implications. Weight gain, tooth decay, dietary deficiencies and an increased risk of type 2 diabetes are just a few of the harmful effects of consuming too much sugar.

Artificial sweeteners are immensely sweeter than white sugar. For example, aspartame is considered to be 200 times sweeter, while acesulfame potassium is thought to be 600 times sweeter! It’s not surprising, then, that these substances are also called “intense sweeteners.” And that’s where the interest in artificial sweeteners comes from: they’re so sweet that you only need a tiny amount. As a result, they add very few or no calories at all. This is why they’re often found in products labelled as “light” or “low in calories.”

Other advantages of artificial sweeteners are that they don’t cause tooth decay and don’t affect blood sugar levels.

So, no calories, no cavities and no effect on blood sugar: this is why artificial sweeteners are so popular, particularly for people with diabetes and those on a low-calorie diet. At least, that’s been the case until recently….

Safe, but not completely risk-free

Advances in research show that what were thought to be health benefits are really not. Some studies suggest that intense sweeteners stimulate the appetite, which would be counterproductive for people who consume them to lose weight. Other more recent studies are looking at their effects on intestinal flora (microbiota).

What’s certain is that the food processing industry is only allowed to add very small, and therefore safe, amounts of artificial sweeteners.

That said, even if sweeteners had no adverse health effects, they’re still artificial and don’t help us get used to eating foods that are less sweet. As nutritionists often say, it’s better to eat real food and eat less if it’s sweet or fatty than to trick the taste buds and brain with imitations!

No more sweeteners in our iögo 0% yogurts!

We now know that the best way to provide truly nutritious and tasty products is to favour natural ingredients. This is why we’re proud to offer you a brand new recipe for fat-free yogurt with no artificial sweeteners!

Our iögo 0% yogurts are now naturally sweetened with a touch of cane sugar and pieces of fruit (except for the vanilla variety, which has no fruit). Their total sugar content is only 8 g per 100 g serving, which is 25% less than our regular yogurts.* And, as always, they’re gelatin-free, contain no artificial colours or flavours, and are made from 100% Canadian milk.

Best of all, they contain only 60 calories per 100 g serving, which is fewer than a medium-sized apple!

There’s no reason to deprive yourself any more: with iögo 0%, say goodbye to artificial sweeteners and hello to a delicious line of fat-free yogurts. Keep an eye out for their new blue packaging to gradually arrive in Canadian supermarkets! 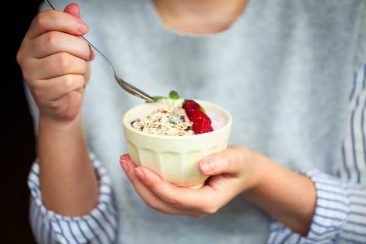 SPOIL YOUR TASTE BUDS WITH IÖGO 0%!

Is this title surprising? If so, that’s normal, since fat-free yogurts aren’t generally recognized as being the tastiest. But at iögo, we appreciate good taste. And that’s exactly what we offer you with our “0%” line of yogurts!

SPOIL YOUR TASTE BUDS WITH IÖGO 0%!

Is this title surprising? If so, that’s normal, since fat-free yogurts aren’t generally recognized as being the tastiest. But at iögo, we appreciate good taste. And that’s exactly what we offer you with our “0%” line of yogurts!

Taste and texture: Two attributes that go hand in hand

Fats have a particular knack for “conveying” the flavours of a food and enhancing them. But fat itself doesn’t have much of a taste, so how can it “give flavour”? The answer is that flavours trapped in fat tend to linger in the mouth longer. But there’s another factor: fat also improves flavour perception because of its effect on texture in the mouth. The richer and smoother the texture, the tastier the food seems.

Of course, our fat-free yogurt doesn’t have the same thick texture as a yogurt that’s high in fat. If it did, you’d be justified in being suspicious! It’s also not what you’d expect from a fat-free yogurt. Nevertheless, we’ve managed to achieve a smooth texture thanks to the quality and right dosage of each ingredient. And it’s this beautiful texture that helps give our fat-free yogurts their flavour.

All the fruits you love

With the exception of our vanilla yogurt, all varieties in our iögo 0% line still contain delicious pieces of fruit. Not dried fruit or what looks like fruit: we’re talking real fruit!

All your favourite fruits are included: strawberries, raspberries, blueberries, cherries and peaches. And because our yogurts are also free of artificial colours or flavours, you get the most authentic fruity taste.

And above all, no aftertaste …

Fat-free yogurts generally contain no added sugar. Their sweet taste comes from artificial sweeteners, substances that have great sweetening power, but are very often accompanied by an unpleasant aftertaste.  Some are bitter, while others have a slightly metallic or aniseedy taste. This aftertaste is quite difficult to mask and requires the addition of other additives and ingredients. We don’t like that ….

So, rather than trying to mask this aftertaste, we chose to completely eliminate artificial sweeteners from our fat-free yogurts. Not surprisingly, the result is very conclusive: our iögo 0% yogurts are truly delicious!

We also appreciate the sweet, delicate taste of our new recipe. This sweet taste comes from both fruit and a little cane sugar. Rest assured, the sugar content of our fat-free yogurts is only 8 g per 100 g serving – which includes the natural sugar from milk and fruit. In other words, there’s the equivalent of less than one teaspoon of added sugar per serving! It’s also 25% less than in our regular yogurts.*

In short, the new recipe for our iögo 0% yogurts tastes so good and authentic that your taste buds will find it hard to believe that these yogurts are fat-free! But they’ll be happy to notice that no aftertaste spoils the party thanks to the complete removal of artificial sweeteners. After all, nothing tastes better than quality ingredients!