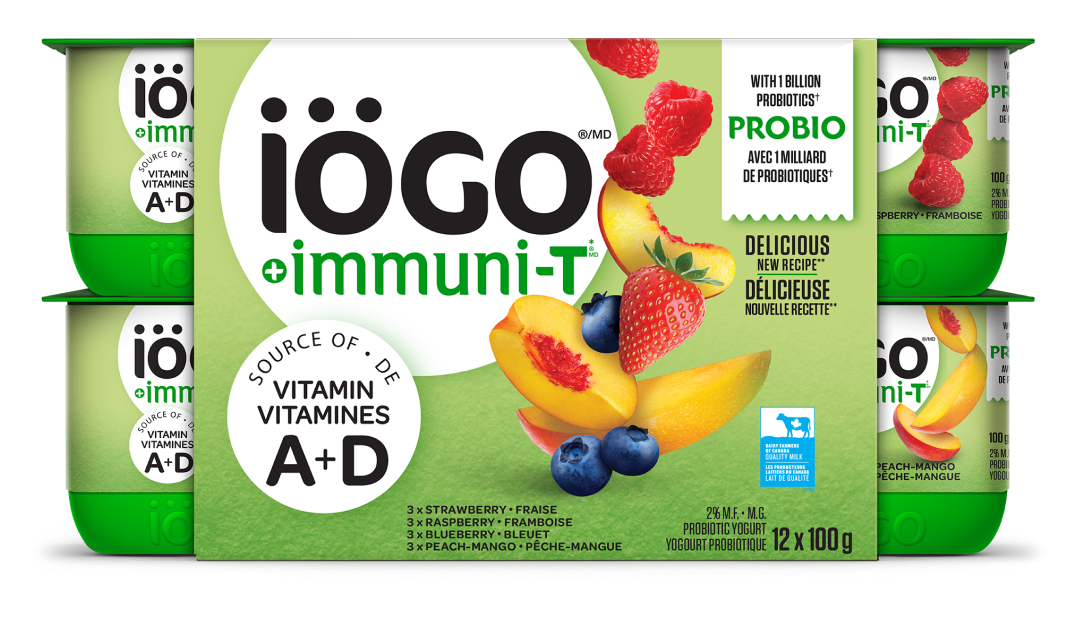 Great for you and your taste buds 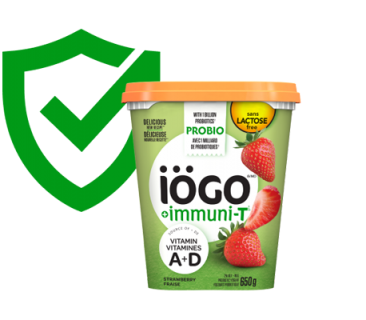 Probiotics: An ally to our well-being

How do we activate our protective mechanisms to feel our best all year long?

The body: An ingenious machine!

The human body’s first natural barriers are the skin and the mucous membranes,* including those in the digestive tract, among others. They are highly effective at eliminating any infectious agents by trapping them in cells or mucus. Intestinal transit, along with the daily elimination of dead skin cells, will do this job and kick intruders out. However, if the aggressor gets through, many innate immune mechanisms come into play. Just like on a battlefield, we have first and second lines of defence, and both are well organized.
An unexpected ally of the immune system is currently attracting the attention of numerous researchers: the microbiota.

Microbiota … know what that is?

According to Bourlioux, the microbiota is an important group of bacteria found throughout the intestinal tract and whose composition varies depending on their location and the individual’s age and stage of life. Another term used for microbiota is intestinal flora.

[*The tiniest external openings are protected: the cornea by tears, the nose by mucus, the ears by wax, the stomach by gastric juices, the intestines by bacterial flora, etc.]

A number of studies have shown that an imbalance of the microbiota is associated with an increase in vulnerability to inflammatory diseases, allergies and metabolic syndrome (diabetes, obesity and risk of cardiovascular disease). There is also an undeniable link between the intestinal flora and the immune system, as up to 70% of the cells in our immune system are found in the gut. The scientific community is unanimous on one point: continuous lactic acid bacteria in fermented dairy products such as +immuni-T* yogurt contribute to healthy digestive flora.

At the 2016 International Conference on Nutrition in Medicine, seven nutritional recommendations were put forward to keep your intestinal bacteria in good health:
·Build meals around plant-based foods: vegetables, fruits, whole grains and legumes.
·Aim to consume at least 50 g to 55 g of fibre per day.
·Include at least 5 to 8 g of plant-based prebiotics a day.
·Eat foods that are fermented or contain probiotics.
·Avoid red meat and food additives.
·Limit fat consumption, especially if you are at high risk of type 2 diabetes.
·Use antibiotics only when necessary

The recipe to help your body optimize its natural defences is simple: adopt a healthy lifestyle, get plenty of exercise, sleep well and eat properly! Starting the day with smart and highly nutritious foods seems trivial, but it means giving yourself the ammunition to get through your day, regardless of the season. Consider a slice of cantaloupe, a few apricots or prunes, a handful of pumpkin seeds or a serving of yogurt. These little things will make a difference from morning to night.
*+immuni-T contains more than one billion probiotic bacteria (BB-12 Bifidobacterium lactis) per 100-gram serving.

Scavuzzi B. M. et al. Page viewed on November 17, 2017. The role of probiotics on each component of the metabolic syndrome and other cardiovascular risks (2015)[published article] Expert Opinion on Therapeutic Targets 2015 and [online] 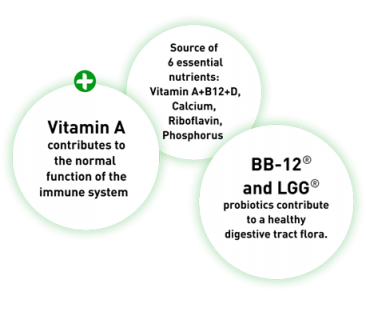 Daily health starts with a capital “A”

The benefits of vitamin A go beyond healthy eyes, bones, teeth and skin. This vitamin also helps maintain the immune system.

Vitamin A helps ensure the proper functioning of first-line immune defences, such as those in the cells of the intestinal wall, mucous membranes and the inflammatory process, among others. It also plays a role in the production of antibodies.
It’s the only vitamin recognized by Health Canada on certain food packaging for its contribution to maintaining a normal immune system.

In our diet, vitamin A comes from either animal sources (retinol) or vegetable sources (carotenoids). Significant animal sources are liver, fatty or vitamin A-fortified dairy products, and fatty fish.
Vitamin A intake comes, in part, from vegetables and fruits. To fulfill this goal, at least five servings of fruits and vegetables must be consumed daily. Other sources of vitamin A are dairy products, meat and alternatives, and grain products.
Finally, when we examine the dietary intake of Canadians, more than 40 % for most age and gender groups are not getting enough vitamin A. Eating foods that contain it would make up this deficiency very easily.

Given the importance of dairy products in contributing to the intake of vitamin A in Canada, all liquid, evaporated, or powdered skim milk should be fortified to replace the amount lost during skimming. However, this is no longer a requirement for a product made with milk, such as yogurt.
A quick scan of various product labels will confirm that iögo Immuni-T is the only probiotic yogurt in its class* made with vitamin A-fortified milk and that one 175-gram serving helps provide 15% of the daily value of vitamin A. This is an undeniable plus for those who watch what they eat!
*regular probiotic yogurt, not reduced in fat

Canadian Food Inspection Agency. Page viewed November 17, 2017. Foods to Which Vitamins, Mineral Nutrients and Amino Acids May or Must be Added, updated in 2014 [online]

[NOTE: THE ARTICLE STUDIES THE QUEBEC POPULATION, BUT WE HAVE THE CANADIAN DATA: For the Canadian average (higher prevalence rate), which does not reflect the distinctive characteristics of Quebec: The prevalence of insufficient vitamin A intake was more than 40% for most age and gender groups. Health Canada. Page viewed November 17, 2017. Do Canadian Adults Meet their Nutrient Requirements through Food Intake Alone? (2012)[online]

For information on vitamin supplements used by Canadians, a recent study of Canadian provinces has not yet been analyzed but the first reports were released in June 2017:
Statistics Canada. Page viewed November 17, 2017. Health Fact Sheets – Use of nutritional supplements, 2015 [online] 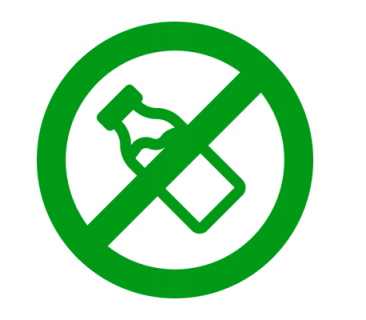 I love dairy products, but they don’t love me.

That’s unfortunate, because dairy products aren’t just delicious but part of a healthy and balanced diet.

Is lactose-free for me?

Bloating, flatulence and stomach aches are often signs of a digestive problem. For some people, lactose may be the cause. Advice on this issue can come from many sources, but what are the facts?

Is lactose easy to digest?

Lactose is a sugar that naturally occurs in the milk of cows and other animals (e.g. goats). It’s also found in foods made from these types of milk. To digest it, the digestive tract usually produces lactase, an enzyme that breaks down lactose into two other sugars that are then absorbed and used by the human body.

For some, not so easy!

Normally, the digestion of lactose takes place in the small intestine. However, some people don’t produce enough lactase to digest the sugar effectively. The lactose then travels to the large intestine, where it’s transformed by the intestinal flora into various compounds, including gas. For some people, flatulence can occur often and be relatively painful. The discomfort may last several hours and eventually be accompanied by cramps, diarrhea, nausea or vomiting.

In the process of fermenting lactose, bacteria in the large intestine produce hydrogen, a gas absorbed into the bloodstream and is expelled from the lungs. By measuring the amount of hydrogen exhaled, it can be determined whether a person is lactose intolerant. It’s a simple, readily available test that should be interpreted by a specialist to personalize the appropriate treatment approach based on observed symptoms.

Foods made from milk don’t all have the same lactose content. Some yogurts contain more than others because of the amount of skim milk powder, whey or milk solids added to make them. The lactose in yogurt is digested easier than that in milk.

Dietary lactase can be added to dairy products such as milk and yogurt to eliminate the presence of lactose. The claim “lactose-free” means that the company has provided evidence that lactose is no longer detectable in the final product.
The claim “reduced lactose content” is much less explicit than the previous one! A mere 25% reduction of the initial lactose content allows a manufacturer to make such a claim on the packaging. This means there’s a residual amount of lactose in the final product. The difference is important!

The lactose tolerance of each individual is different and depends on many factors. It can vary over the course of a day just as it can over a lifetime based on specific genetics, dietary habits and health.
In all cases, each treatment must take an individual approach. This means taking the time to identify the causes of the lactose intolerance or, at the very least, recognize the signs
Sometimes, the issue can be managed by consuming your favourite dairy products as part of a meal containing protein, fat and fibre. Remember to avoid clinging to major dietary restrictions that could hurt your overall health and to search for products tailored to your needs.

iÖGO offers a wide selection of delicious yogurt products made with real fruit and no artificial colours or flavours.